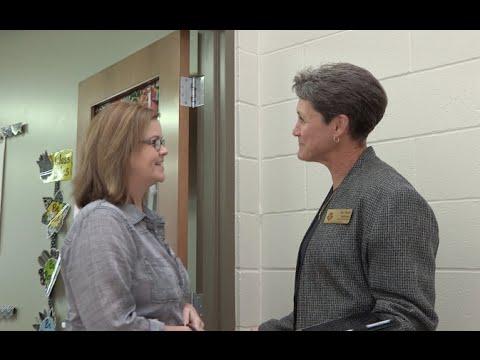 At an elementary school in rural Arkansas, principal Rocci Malone works closely with her teachers to set year-long goals and monitor their progress in improving aspects of their teaching.

Malone has an open door policy and uses observations and the post-observation conferences as opportunities to build a supportive relationship.

Leading From the Front Lines

“I’m not here to run anyone off,” announced the new principal of a small elementary school to her staff in August last year. “I’m going to be on the front lines fighting with you.”

Such was the battle cry of veteran educator, Rocci Malone, a veteran educator of 32 years who after leading a large takeover of a high school in Texas now finds herself principal of Atkins Elementary in rural Arkansas. She moved to this position last year when she left the Lone Star State and returned to her hometown.

The culture shock was significant for Malone. Yet, she marched on with her proactive tactics. By May, it was evident her efforts were not vein when she asked teachers to attend a meeting two weeks before the sweet relief of summer. It was not the ideal time to ask her exhausted staff for more of their time, admits Malone.

“At that point in the year, the teachers just wanted it all to end,” she said.

Nevertheless, Malone asked her staff to spend an hour drafting Professional Growth Goals for the year ahead, as required by new Arkansas evaluation policies.


The afternoon of the meeting, to Malone’s surprise, there was excitement in the room. Teachers split up into their professional learning community groups and began rich conversations, she said. When 5 p.m. arrived, she interrupted their work to announce they were free to go.

“For the next 20 minutes, not one teacher moved,” Malone said. “They stayed focused and worked excitedly. Many were still there talking and working an hour later. This was after a long day of work! It really energized me.”

Malone kicked off the summer hopeful that despite challenges in adjusting to a new system, she had a framework for sparking collaboration and reflection among her staff.

The Arkansas Department of Education required schools across the state to implement the Teacher Excellence and Support System (TESS) in the 2014-15 school year. It includes a swath of changes, from learning to use a new technological platform to setting individual and school-wide growth goals.

“If it’s used correctly, TESS is a great tool to help teachers improve their instruction in many ways,” Malone said. “In Arkansas, the way it’s set up is very interactive.”

Arkansas educators must use a system to input observation data, upload classroom artifacts and set up conferences. After initial training, there was a lot of fear from teachers about it, Malone said. She recalls new teachers walking on egg shells trying to integrate the system into their work.

“But as they moved through the year, it got easier and teachers began to use it more,” she said. “It’s just about building relationships and trust. Once you do that with a couple of teachers, the word spreads.”


Malone’s teachers were able to thrive amid these policy changes because of her exceptional leadership, said Malone’s former colleague and a current principal in Texas, Scott Sralla. Sralla worked closely with Malone as an assistant principal when she served as principal of Nimitz High School in Texas in 2013.

That year, Sralla adopted the phrase “teaching like your hair’s on fire” in an effort to capture her drive. He describes her as dedicated, unrelenting and excellent. What he recalls most about her was that she struck, “a balance between setting high expectations and the understanding that her door was always open.”

“She’s very visible in the classroom and outside the classroom,” said Stacy Webb, a teacher at Atkins Elementary. “She is very motivating. She is there for us. Her door is always open if we have questions or concerns and she’s willing to help us out in any way that she can.