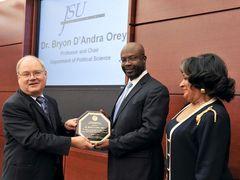 Motivating the next generation of researchers.

Dr. Orey researches the impact of hair texture and complexion on the evaluation of black political candidates. He is also researching the impact of racially traumatic stressful events on the physiological and political attitudes of black citizens. The National Science Foundation and The Mississippi Humanities Council have funded his research. Dr. Orey has also been recognized as Jackson State University’s Teacher of the Year in 2011, and has published over 20 scholarly articles.