ATLANTA — The lowest-income families in many Southern states saw major five-year increases in the share of their income required to send a student to a public four-year university — and the pandemic could make the situation worse.

The Southern Regional Education Board’s new college-affordability profiles for the South and 16 individual states show the average family had to spend 31% of annual income after financial aid for all the educational expenses of a full-time student at four-year research universities in 2017-18, the most recent comparable data available.

But in some states, families earning under $30,000 — the region’s largest segment of families with children in college — would have to pay more than their entire annual income for a student to attend one year at a four-year research university. And that’s after financial aid is made available.

“Making college affordable and possible for every student is a critical part of improving our workforce — and this issue is even more pressing as states deal with the economic impacts of the pandemic,” SREB President Stephen L. Pruitt said.

And fewer families are applying for financial aid in most SREB states. In 2020 compared with 2019, the rate of students completing the federal FASFA form dropped by an average of 15% overall and by an average of 22% in the region’s high schools which largely serve students from low-income families.

“Two- and four-year colleges should be engines of recovery as every state and community adjusts to a fourth industrial revolution brought about by automation and technology-driven changes in nearly every profession,” Pruitt said. “Financial aid for students who most need the support is especially critical in this era.”

For the region’s average-income families in 2017-18, 29% of their income was required for the net price at regional four-year state institutions and 17% on average to cover educational expenses at two-year institutions in SREB states. 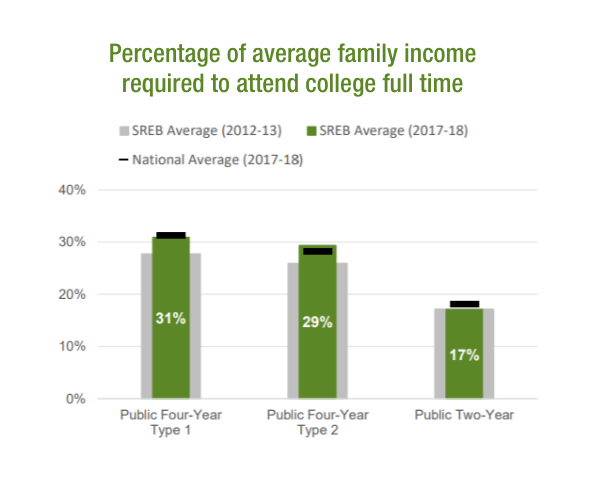 Data in these affordability profiles is from 2017-18, the most recent comparable data available, and does not reflect the impact of the pandemic. Now, as many states face budget shortfalls and students and their families face financial hardship, many students may find it even more difficult to afford college.

NEWS RELEASES FOR EACH STATE: