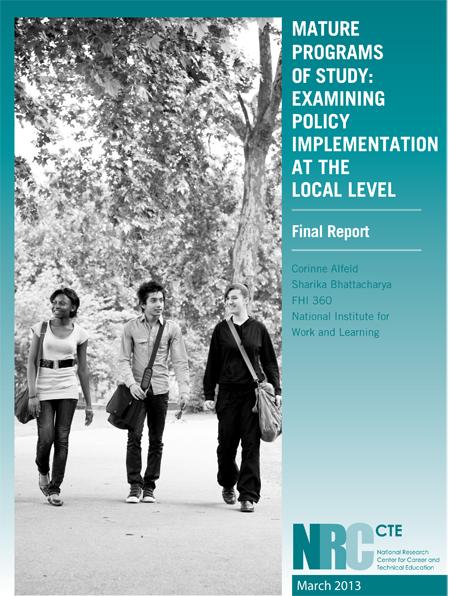 This report presents the final results of a mixed-method longitudinal study that used a backward-mapping approach to examine mature, POS-like programs at three community colleges and their feeder high schools across the country. This study is part of the NRCCTE’s portfolio of groundbreaking longitudinal research on POS in the United States.

Corinne Alfeld and Sharika Bhattacharya, NRCCTE researchers at FHI 360, sought to identify the key components of POS that support students’ transition to college and careers, including whether and how participation affects students. Alfeld and Bhattacharya started from the desired end point of POS– colleges awarding industry-recognized credentials or degrees to students who began the POS while in high school– and identified both key components of the programs and how students progressed through the programs to get to this end point.

They found that POS development is a complex and lengthy process, and that the key components of POS in practice do not neatly align with the key components contained in the Perkins policy guidance. They also found that, although the majority of study students did not continue with the same high school POS in college or work, POS participation did have a positive effect on a variety of high school and college outcomes.

Selected findings from the study include:

Overall, the researchers suggest that the continuity of students in the same POS from high school to college and career should not be the only measurement of the success of the policy. Quantitative results suggest that POS implementation efforts will benefit students’ postsecondary success.