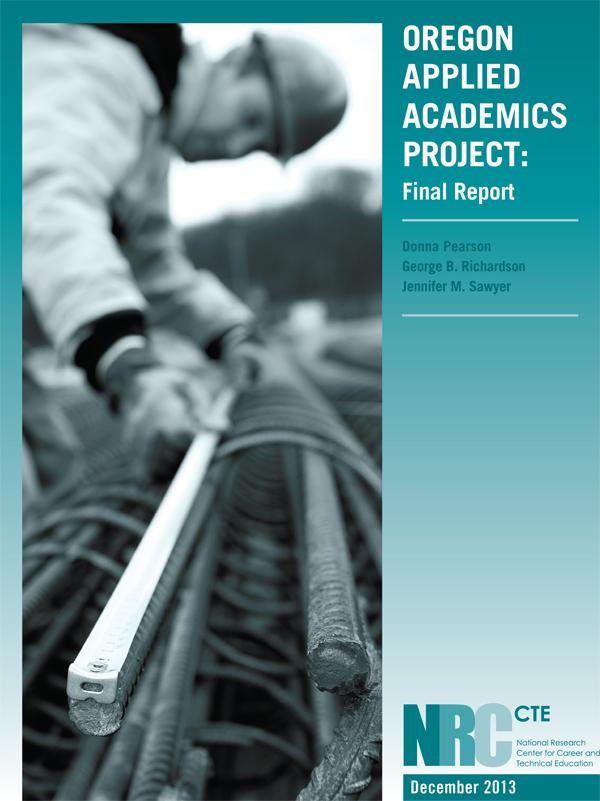 This report contains the findings of the Oregon Applied Academics research and development project which spanned three academic years from 2010 through 2013. The overall purpose of the project was to develop and implement a technical math course that would meet graduation requirements and improve student performance.

The authenticity, success, and sustainability of the Math-in-CTE model led to new questions about mathematics instruction, congruent with those of the Oregon leaders who proposed the Oregon Applied Academics Project:

As the project leaders began to address these questions, they were intentional in drawing upon the tenets of problem-based learning (PBL) to develop a new model for teaching mathematics. The PBL approach situates the learning in a real-world problem and creates an environment for students to learn by exploring the problem and creating solutions for the problem (Beringer 2007; Gülse.en & Kubat, 2006; Hmelo-Silver, 2004). Two hallmark qualities of PBL are: (a) that the student has “not quite enough content knowledge” to solve the problem, and (b) that the problem itself is ill-constructed, meaning that there is not a prescribed or predetermined path to solution (DeYoung, Flanders, & Peterson, 2008; Zhong, Wang, & Chiew, 2010). Students are compelled to be active participants with ownership in their own learning.

In the first year of the Oregon Applied Mathematics Project, teachers who had previous experience with Math-in-CTE were recruited and trained. Development teams of Math and CTE teachers identified the mathematics embedded in the manufacturing, construction, and engineering curricula. They generated “real-world problems” and “big questions” situated in the CTE content that would require specific mathematics skill to answer. Using a template designed with a PBL approach, they formed the problems and questions into units and identified (a) the overall goal of the unit, (b) the general content of the unit, © the CTE concepts addressed, (d) the math concepts addressed, and (e) the Oregon math standards addressed. After units were selected and organized, the teams developed lessons within the units using a seven-element framework adapted from Math-in-CTE model.

The teacher teams developed a technical math course with nine units; the course was piloted in each of the participating districts in Year 2 of the project. Limited pre- and post-testing of math achievement was conducted in three classrooms to ascertain if students were gaining math skills. The preliminary analyses showed a statistically significant treatment effect was detected in those classrooms.

Students and teachers alike provided positive feedback regarding the course, finding it both relevant and challenging. Challenges for teachers included having a lack of knowledge of CTE content, finding gaps in the math content, finding the “tipping point” between math and CTE content, and accommodating students with varying abilities. Benefits included student engagement and empowerment, pedagogy and assessments that ensured students “got it,” benefits of the community of practice, and general excitement of trying something new.

Year 3 of the project heralded the final year of the project, which expanded the invitation to math teachers from other districts to engage in the professional. At the conclusion of Year 2, the piloted course units were critiqued, refined, and reordered for implementing and testing in the final phase. The units presented real-world problems within the following CTE contexts: manufacturing, architecture, bridge building, marketing, energy transfer and conservation, electrical power, and construction of roof trusses and staircases. A final capstone project brought all skills together in the construction of a “house” for pets or dolls. The teachers were provided initial professional development in August ahead of the implementation as well as ongoing support throughout the year through additional PD and WebEx sessions. Students were pre- and post-tested on measures of math achievement and math attitudes.

Findings revealed that, overall, the math attitudes of students who participated in the technical math course improved more than their peers taking traditional algebra and geometry courses. These results were consistent with the qualitative findings from student interviews conducted in Year 2 and subsequent anecdotal evidence collected in Year 3. In summation, a majority of the students reported that they enjoyed the context-based PBL approach to math and benefited from the experience of working on the real-world applications.

The teachers indicated continued satisfaction with the model and observable benefits for their students. All teachers in Year 3 of the project reported they will continue to use the units in the future whether or not the full course is offered in their schools.

Several principles emerged from Oregon Applied Academics Project that echoed those first recognized in the Math-in-CTE research (Stone et al., 2008). These principles pointed to aspects of the model that made it work, and findings suggest they provide valuable guidance for future implementations of the model. They include: (a) establishing partnership between math and CTE teachers, (b) fostering a community of practice, © maintaining math as the central feature of the problems and questions, (d) adapting the instruction, and (e) recognizing mathematics teachers are not CTE teachers.