Programs of Study as a State Policy Mandate: A Longitudinal Study of the South Carolina Personal Pathways to Success Initiative 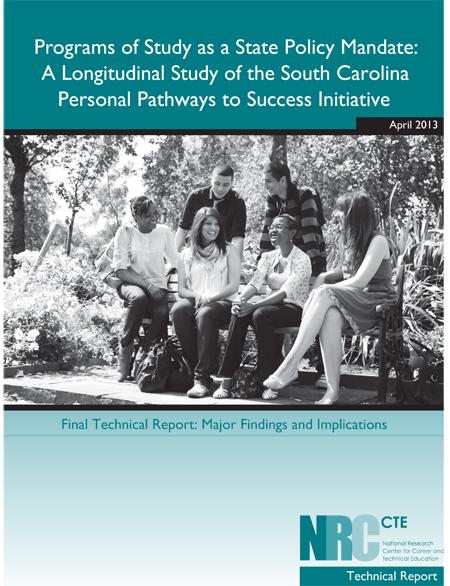 This is the final technical report from the NRCCTE’s five-year longitudinal study of South Carolina’s Personal Pathway to Success initiative, which was authorized by the state’s Education and Economic Development Act (EEDA) in 2005. NRCCTE-affiliated researchers at the National Dropout Prevention Center at Clemson University investigated the extent to which EEDA facilitated the creation of programs of study/career pathways and whether these programs led to improved student high school and postgraduation preparation and planning. The study followed two student cohorts from a sample of eight high schools from economically and culturally diverse regions of the state.

Overall, researchers found that EEDA was having some positive impacts, including increasing career-focused activities at all schools and enhancing roles for guidance personnel. Surprisingly, schools with more challenging economic situations were more likely to embrace and fully implement programs of study/career pathways than schools with more resources. Researchers found mixed or contradictory results on associations between the development of programs of study/career pathways and student outcomes.

The full technical report includes two technical appendices and recommendations for researchers, practitioners, and policymakers interested in transforming CTE– and future iterations of Perkins– through sector strategy-responsive collaborations between secondary, postsecondary, and business and systemic reforms of state policies and practices.