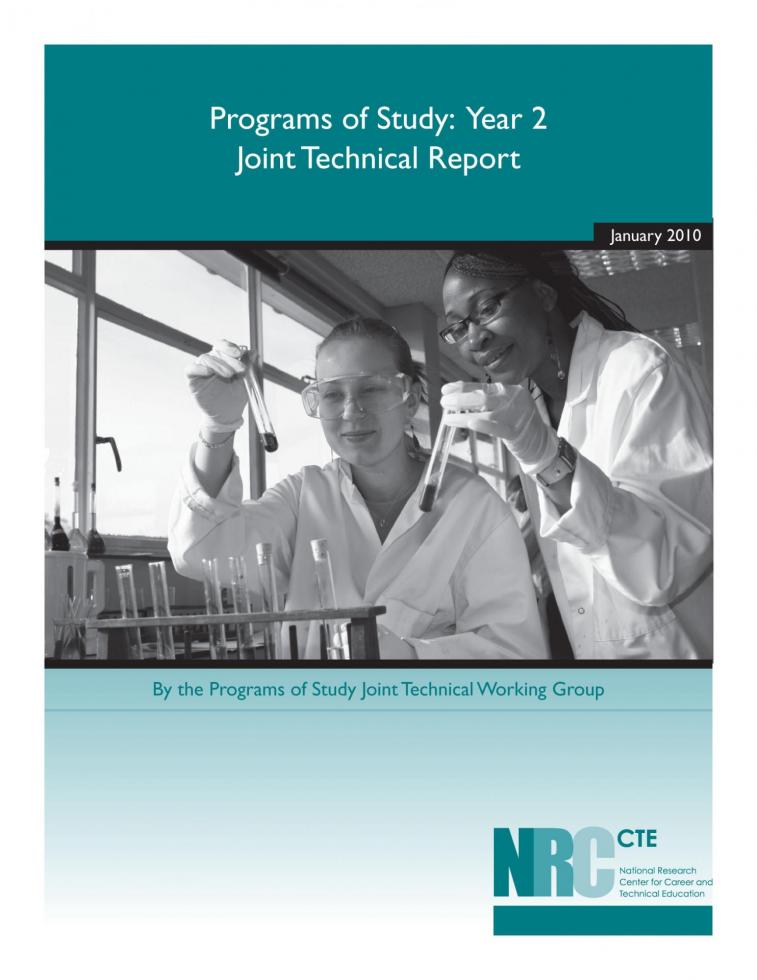 This is a progress report on three studies being conducted by the National Research Center for Career and Technical Education (NRCCTE) that examine the implementation and outcomes of Programs of Study (POS), which were required in the 2006 reauthorization of the federal legislation for career and technical education (CTE). The Carl D. Perkins Career and Technical Education Improvement Act of 2006 (otherwise known as Perkins IV) states that recipients of federal funds must offer at least one POS that includes coherent and rigorous content aligned with challenging academic standards and relevant career and technical content. This content must be delivered in a coordinated, nonduplicative progression of courses that align secondary education with postsecondary education and lead to an industry-recognized credential or certificate at the postsecondary level or an associate or baccalaureate degree. In addition, POS may include the opportunity for secondary students to participate in dual or concurrent enrollment programs or other ways to acquire postsecondary education credits.

In this joint report, we summarize the literature on previous initiatives that share many similarities with the components of POS, specifically Tech Prep, career pathways, and dual/concurrent enrollment. Most of the evidence on these predecessors of POS is mixed. Tech Prep was designed to directly link secondary and postsecondary education, but studies have not found that its participants are more likely to continue their education or earn postsecondary credentials. Career pathways are associated with higher grade point averages (GPAs) and less need for remediation at the postsecondary level, and dual enrollment gives its participants an advantage in total credits earned. As with Tech Prep, however, postsecondary degree attainment is low for both career pathway and dual enrollment participants.

We also summarize the evidence on the effects of participation in CTE on engagement in school, academic achievement, and transition to postsecondary education and employment. Most studies that have examined the relationship between CTE participation and high school graduation have found an association between the two, but the relationship is not straightforward. It is curvilinear: High school graduation is associated with taking neither too few nor too many CTE courses, but rather a ratio of about one CTE to every two academic courses. All studies found that CTE students score lower than college preparatory students on academic achievement tests, but there is evidence that enhancing instruction on the academics inherent in the CTE curriculum can improve student performance on such tests. The studies relating CTE course-taking to postsecondary enrollment have found that the more CTE courses students take, the lower their chances that they will continue their education.

We then describe three field-based research studies initiated by the NRCCTE that seek to examine POS from different perspectives. The first of these, referred to as the Mature POS study, identified eight sites that appeared to have had most of the components of POS, especially strong secondary-postsecondary articulation, well before these were legally required by Perkins IV. Site visits were made to each of these sites to gather information about the structure and development of their POS. From the information gathered, three final sites were selected as most closely aligned with the legislative requirements; these three are being studied longitudinally to better understand the factors underlying their development and operation and the outcomes of their students.

The second study, referred to as the Personal Pathways study, is tracking the implementation and impact of the Education and Economic Development Act (EEDA), which was passed in South Carolina in 2005. EEDA establishes a statewide education reform policy that requires career-focused POS for all students across the high school curriculum. This project is tracking the implementation and impact of this policy in eight high schools that were selected to represent diversity in the degree of implementation as well as in size, location, demographics, and the level of school and community resources of the geographic areas they serve. Site visits have been conducted to each of these schools in order to develop baseline data on their respective implementation of the mandated reform policy. Other data on the selected high schools come from state student records that will track selected cohorts from middle school through high school and from questionnaires developed in cooperation with the study teams of the other two NRCCTE POS projects. The study will continue to follow the selected cohorts for three years.

The third study, referred to as the Rigorous Tests study, is examining POS in two large districts, each of which offers multiple POS. The first district uses a lottery to select students for its POS, which permitted the study team to construct a randomized control trial of the effects of participating. In the second district, the study team is conducting a quasi-experimental study that used propensity score matching to select students for a closely matched comparison group. In both districts, data are being collected on program implementation from student cohorts that will be followed from entry into the POS through the first year of postsecondary experience.

The published research on prior initiatives in CTE is not encouraging, but initial data collected for the three NRCCTE studies cause us to be cautiously optimistic about the potential for POS. At this early stage in each of the studies, we offer the following preliminary observations about the implementation of the four legally required core components of POS.

Core Component 2: Include Coherent and Rigorous Content Aligned with Challenging Academic Standards and Relevant Career and Technical Content in a Coordinated, Non-Duplicative Progression of Courses

The integration of academic and technical content was not frequently observed in any study. It occurred most often in CTE courses that used project-based learning and rarely in academic courses that included students from several different occupational areas. Integration requires time for teachers of academic and technical courses to work together to identify the knowledge and skills appropriate for instruction in their respective classes, and district- and school-level administrators typically do not provide the common planning time needed to engage in this work. An added challenge is when academic courses are offered at the home high school and technical courses at a regional CTE center, resulting in the physical separation of academic and technical faculty. When integration occurs, it is often the result of the initiative of individual teachers, not a systematic school process. Project-based learning is by its nature inherently integrative, but in our observations, few teachers use it as their primary instructional method.

Core Component 3: May Include the Opportunity for Dual or Concurrent Enrollment Programs

Core Component 4: Lead to an Industry-Recognized Credential or Certificate at the Postsecondary Level, or an Associate or Baccalaureate Degree

Although we are optimistic, we recognize that successful POS require much hard work at the local level. It is fairly easy to design a POS that shows the academic and technical courses to be taken at the secondary and postsecondary levels, but the real work lies in actually integrating and articulating these courses. This requires extensive interaction and negotiation. If such work is not done, however, the result will be POS that exist on paper but not in practice.