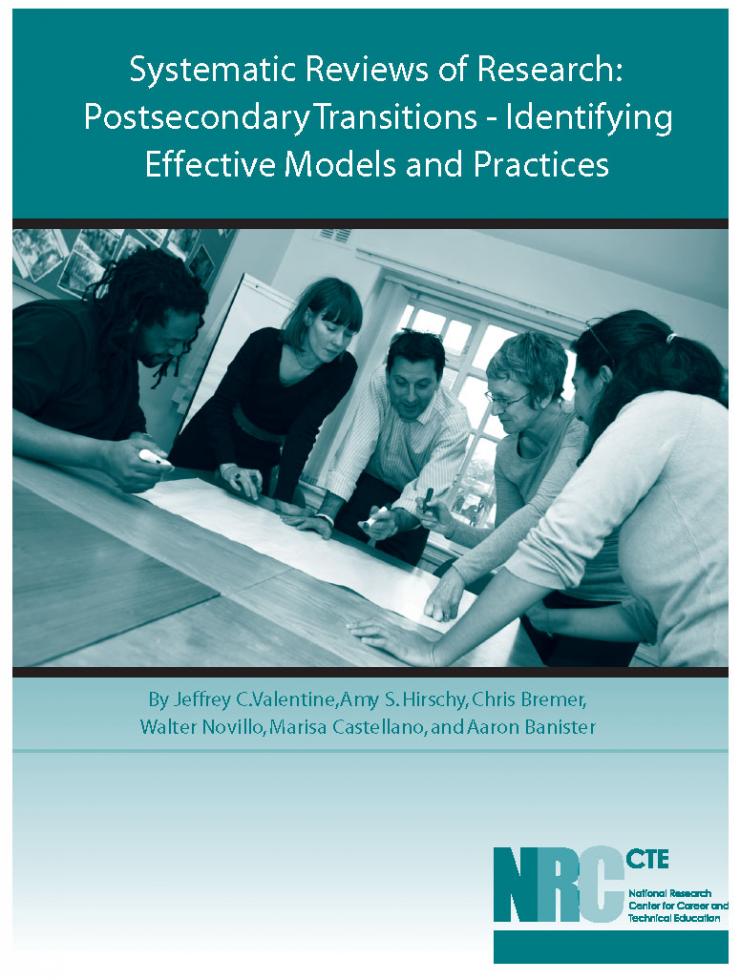 This paper focuses on transition programs for youth to postsecondary education, broadly considered. We address the following questions: (a) What models or programs of transition exist? (b) On what basis can we say one transition program is more effective than another? In other words, how is successful transition defined? c) How are transition models and programs evaluated? and (d) What is the impact of transition programs, specifically those that aim to facilitate transition from one educational system to another, to program completion, or to specific career-related employment for disadvantaged youth?

We identified 16 different general paths that transition programs could potentially address and targeted 9 for this systematic review. A literature search of over 8,000 citations yielded over 100 studies that warranted further examination. Most paths we identified as potential targets for interventions appear not to have been studied using a comparison group design, and we were only able to meta-analyze two paths, which we combined, that had 19 studies of interventions that aim to keep students in college once they get there.

The 19 studies suggest small but potentially important effects on short-term grades earned by program participants. However, several studies employed comparison groups that appear to lead to an artificial underestimation of program effects (e.g., by comparing students on academic probation to students not on academic probation), and some interventions were relatively weak (e.g., adding a journal writing component to an English composition class). Studies that employed more comprehensive interventions and that used relatively more appropriate comparison groups showed more effective results than did studies that used weaker interventions, relatively less appropriate comparison groups, or both.

Even the best studies included in this review are methodologically suspect, with poor reporting on quality indicators (such as attrition) and an almost exclusive reliance on quasi-experimental designs. As such, these studies do not provide a very strong basis for making policy recommendations. However, this review suggests that there is reason to be optimistic about the potential for relatively comprehensive interventions to help students earn better grades and stay in school, at least in the short term. From a public policy perspective, this review points to the need for more investment in rigorous studies that investigate, at a finer level of detail, the specific aspects of programs that are associated with program success. Rigorous studies are also needed that investigate the interaction between programs and student characteristics in order to determine what types of programs are most effective for which students.