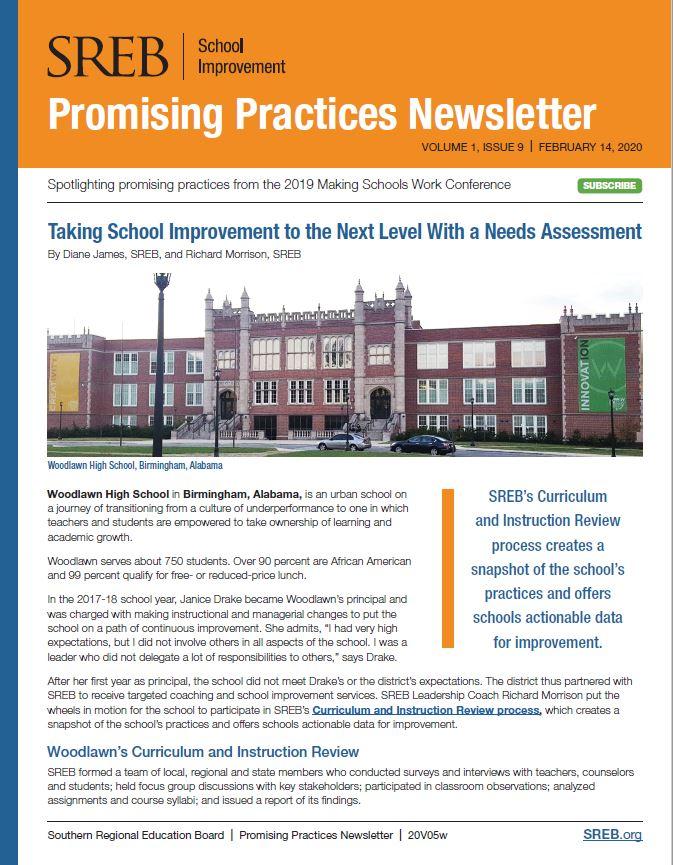 Woodlawn High School in Birmingham, Alabama, is an urban school on a journey of transitioning from a culture of underperformance to one in which teachers and students are empowered to take ownership of learning and academic growth.

Woodlawn serves about 750 students. Over 90% are African American and 99% qualify for free- or reduced-price lunch.

In the 2017-18 school year, Janice Drake became Woodlawn’s principal and was charged with making instructional and managerial changes to put the school on a path of continuous improvement. She admits, “I had very high expectations, but I did not involve others in all aspects of the school. I was a leader who did not delegate a lot of responsibilities to others,” says Drake.

After her first year as principal, the school did not meet Drake’s or the district’s expectations. The district thus partnered with SREB to receive targeted coaching and school improvement services. SREB Leadership Coach Richard Morrison put the wheels in motion for the school to participate in SREB’s curriculum and instruction review process, which creates a snapshot of the school’s practices and offers schools actionable data for improvement.

SREB formed a team of local, regional and state members who conducted surveys and interviews with teachers, counselors and students; held focus group discussions with key stakeholders; participated in classroom observations; analyzed assignments and course syllabi; and issued a report of its findings.

The overall objective of the curriculum and instruction review is to determine how school leadership can systematically ensure teachers are preparing students to make a successful transition to postsecondary education through five focus areas:

To Drake’s surprise, the review validated her observations and provided valuable information and data on the school’s strengths and challenges. “The CIR was great,” says Drake. “It tells you as a leader what you need to start focusing on.”

The real eye-opener for Drake was students’ survey and interview comments. According to her, students indicated they weren’t being challenged enough. They were concerned they weren’t in the right classes and wanted a greater variety of college- and career-readiness classes from which to choose.

Drake reasons, “This is why they weren’t performing on assessments. This is why they have a lack of interest in subject areas. This is why they don’t want to come to school. It’s because they are not getting what they need to be successful in the classroom.” The school simply wasn’t offering the types of classes students are interested in, she adds.

The curriculum and instruction review sparked a transformation not only of the school, but of her leadership style as well. “As a leader, I started distributing leadership,” Drake notes. She formed the Woodlawn Leadership Team and tasked them with devising strategies for continuous improvement in areas red-flagged by the review.

First, Woodlawn took steps to ensure students got into the right classes. Counselors began looking at transcripts earlier and “letting students know what classes they needed to take to graduate. Counselors began asking students what classes they want to take instead of putting them in classes,” says Drake. They surveyed students to get their ideas on what needed fixing and how to fix it.

The leadership team identified ways teachers could make their instruction more rigorous and incorporate more engaging activities in the classroom. The team urged teachers to shift from being the sole talker in the classroom to facilitating learning, notes Drake. The school explored a tiered teacher support system to increase the effectiveness of teachers’ classroom practices.

Drake also put in place a bell-to-bell schedule that allows the school to offer a 50-minute intervention period for students who are at risk of falling behind. She also assembled a literacy plan to help ninth graders who were reading below grade level meet readiness standards.

Because less than a year has passed since Woodlawn participated in the curriculum and instruction review process, it’s too soon to measure improvements in student performance. But by involving teachers and students in the school’s management and instructional practices, Drake has seen positive changes in the school. Communications among school personnel and students has improved; teachers have become instructional leaders; and the school has established a culture of collaboration.

Drake’s efforts didn’t go unnoticed by the district. At the end of the school year, she was promoted to principal coach at the Birmingham City School District. Drake believes she put in place protocols and procedures that have put Woodlawn on track to increase student scores and change the entire school’s culture.