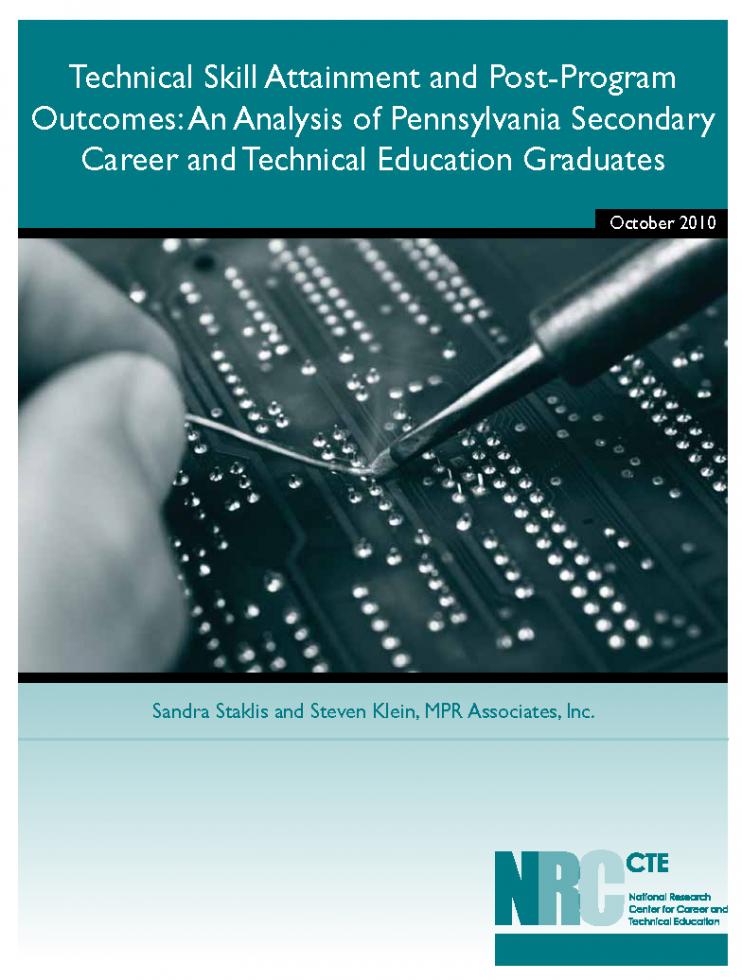 To address this gap in the literature, this study analyzes data on over 21,500 high school graduates with a CTE concentration in Pennsylvania who completed a workplace readiness or occupation-specific assessment developed by the National Occupational Competency Testing Institute (NOCTI). To control for student demographic characteristics and educational experiences, assessment score record data for the 2005–2006 and 2006–2007 academic years were merged with student-level administrative records maintained by the Bureau of Career and Technical Education, PDE. Follow-up data on graduates’ post-program work experiences were obtained from a state survey administered to all CTE program graduates to ascertain their job status in the second quarter following their high school completion. Postsecondary enrollment data were obtained by matching student identifiers with records maintained by the National Student Clearinghouse (NSC) to determine whether individuals enrolled in a postsecondary institution at any time between completing high school and the fall of 2009.

Descriptive statistics identify the demographic, high school academic, and CTE program characteristics of graduates who took workplace readiness and occupation-specific technical skill assessments and show graduates who had earned industry certifications by program type and skill level. The second half of the analysis estimates logistic regression models of the effect of technical skill level (as measured by a technical skill assessment or industry-recognized certification) on the odds of postsecondary enrollment following high school graduation.

Although Pennsylvania is one of the most advanced states in administering technical assessments to all secondary CTE program graduates, associating test performance with post-program placements is compromised by low response rates. Of the nearly 30,000 graduates for whom NOCTI test scores were available, researchers were able to match educational records for just over 21,500 individuals (72%). Of these, researchers were able to identify self-reported employment outcomes for nearly 6,100 (29%) and postsecondary enrollment outcomes for roughly 8,800 (41%) CTE graduates. Missing data were greatest for students scoring at the lowest level of the technical assessments.

Among the graduates for whom record matches were achieved, descriptive statistics indicate positive associations between graduates’ technical skill level as measured by a technical skill assessment, being female, and enrolling in a Health Occupations or Occupational Home Economics program. Skill levels also are positively associated with graduates’ grade point average (GPA) and the number of advanced math and science courses passed.

Multivariate analyses indicate that, when controlling for race/ethnicity, gender, the number of advanced science and math courses passed during high school, and GPA, the odds of CTE program graduates enrolling in higher education are greater by a factor of 1.39 for those with the highest level of technical skill than those with the lowest level, as measured by performance on an occupation-specific assessment. Among CTE graduates who took a workplace readiness assessment, the odds of enrolling in postsecondary education among those scoring at the highest skill level are greater by a factor of 2.22 than those scoring at the lowest skill level. Although data on industry-recognized certifications were more limited, no statistically significant relationship was found between earning a certification and enrolling in higher education.