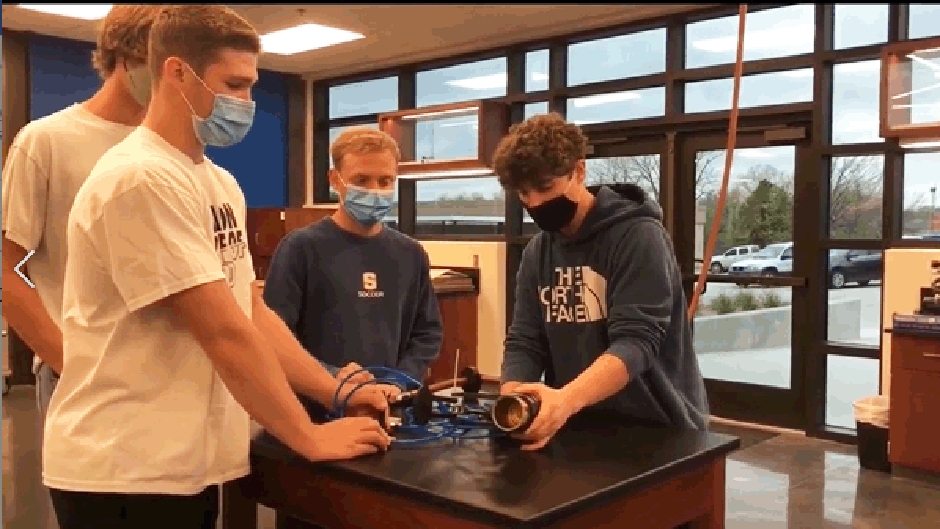 Students at Meridian Technology Center in Stillwater, Oklahoma, are enjoying maximum benefits and national recognition for their project-based learning experiences. In the 2020-21 school year, three teams of students in Meridian’s STEM Academy were selected as finalists in NASA’S annual HUNCH design competition. 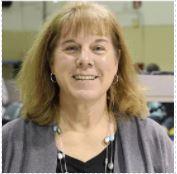 HUNCH — High Schools United with NASA to Create Hardware — is a national instructional partnership between the National Aeronautics and Space Administration and schools. HUNCH uses project-based learning to inspire students to build cost-effective hardware and soft goods for use aboard the International Space Station. Challenged to find solutions to real-world problems identified by NASA engineers and astronauts, students receive feedback on their concepts, designs and fabrication tasks from NASA engineers and staff.

Debbie Short, an instructor in Meridian’s Pre-Engineering STEM Academy, says her students have participated and been finalists in the HUNCH program for the past two years. What’s more, all three of the three student teams who presented their final projects in 2020-21 were finalists, “which personally just blew me away,” says Short.

The HUNCH program has six different pathways that include design and prototyping, software, hardware, sewn flight articles, video and media, and culinary. Each September, NASA releases a description of 10 to 15 potential HUNCH projects. Students select which projects they are most passionate about and want to tackle. This year, Meridian students chose to work on Simulated Gravity VR/AR (Virtual Reality/Augmented Reality), Energy Food Bite Dispenser and Trash Ejector.

The Projects and the NASA Challenge

Simulated Gravity AR/VR: When astronauts live on the space station for several months at a time, even though they exercise every day, they often experience difficulties when they return home due to the effects of low gravity on the human body. NASA challenged students to use virtual reality and/or augmented reality technology to design a space station environment that simulates the effects of gravity on astronauts living in that environment. 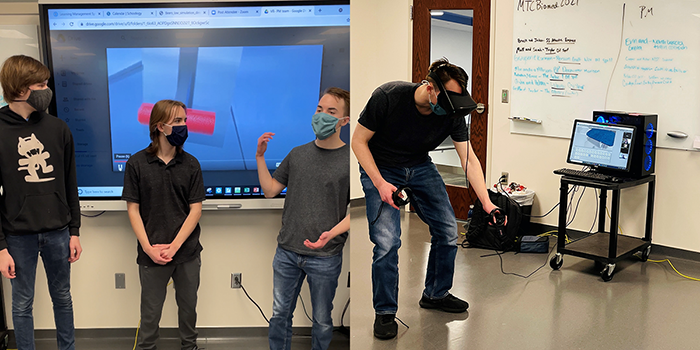 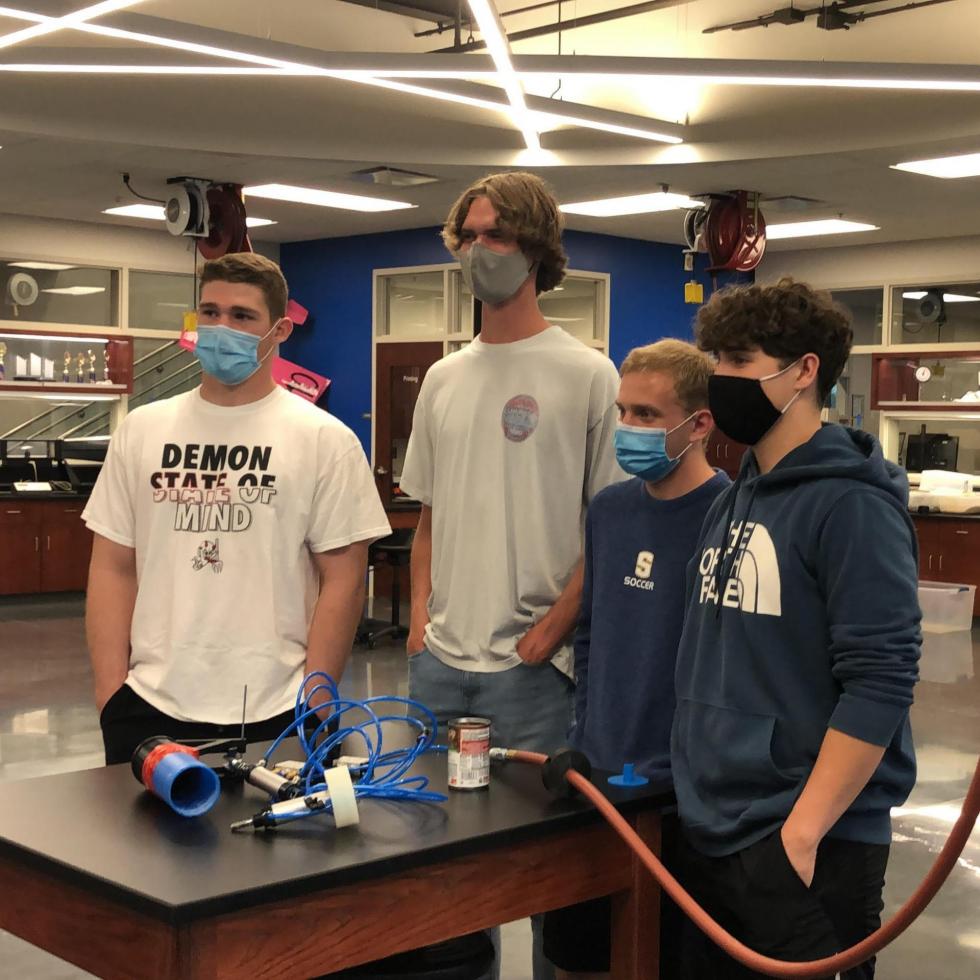 Mars Trash Ejector: Astronauts traveling to and from Mars will accumulate a significant amount of trash that could be detrimental to their mental and physical health and have a significant impact on fuel consumption. NASA challenged students to come up with a way to dispose of trash on the ISS or smaller shuttle craft.

Students Sam Glenn, Gage Allen, Wyatt Lopp and Seth Thibodeau designed a model prototype that ejects non-human waste from the space station directly into space without losing air in the station. Using a soup can as a stand-in for a small-scale trash can, they demonstrated how pressurized air and locking mechanisms could be used to accomplish this task.

Energy Food Bite Dispenser: Future astronauts will need to walk on the moon or Mars in their space suits for up to six to eight hours at a time — a strenuous task for which they’ll need to maintain their energy. NASA’s astronauts challenged students to find a way to store small amounts of food or water inside their suits.

Student creators Faeron Dewart-Cordray, Reagan Todd and Caroline Elki used 3D CAD (computer-aided design) software to design a dispenser, similar to Pez candy, that could be worn in a flexible tube around an astronaut’s neck and dispense bite-sized foods like fruit chews or beef jerky.

If NASA uses student finalists’ designs, their names will be put on those items when they’re used aboard the International Space Station, says Short. “It has been one of the best project-based learning experiences we’ve implemented in our STEM Academy,” she shares.

Short says many of her students had minimal knowledge of NASA before beginning the HUNCH program, so at the start of school, she asked students to conduct preliminary research about the space agency. In September, NASA announced the 10 to 15 HUNCH projects, and Short’s students were able to select the ones that best captured their passions and interests.

Students then conducted research about their chosen projects in October and November. As part of the process, students searched for patents, participated in Zoom meetings with NASA researchers and developed ideas for their prototypes and display boards.

In late winter and spring, students began the hands-on work of transforming their ideas into models, testing prototypes and documenting their research. They made final presentations of their solutions to NASA in May 2020. Before COVID-19, HUNCH students could travel to the Johnson Space Center in Houston, but during the pandemic, presentations were made virtually. 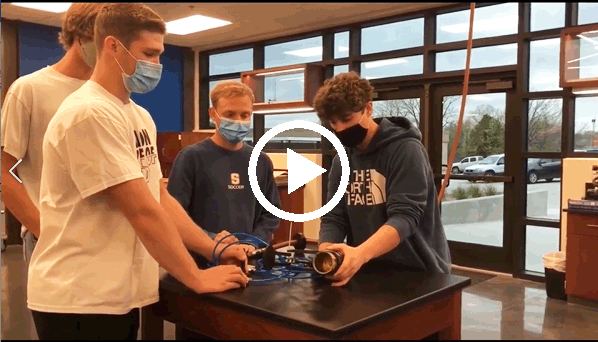 Meridian Technology Center is a shared-time facility that serves 10 local school districts. The school’s STEM Academy includes Pre-Engineering and Biomedical Sciences. Meridian has been designated as a distinguished high school with Project Lead the Way for four consecutive years. High school students in grades 10-12 are on the campus for a half-day — morning or afternoon.

HUNCH aligns with Meridian’s senior capstone engineering development and design course in which students are required to research, design and test a solution to real-world problems. The pre-engineering students are given a budget for their HUNCH projects.

This article was featured in the September 2021 issue of SREB School Improvement’s Promising Practices newsletter.