The SREB Fact Book on Higher Education is one of the nation’s most comprehensive collections of comparative data on higher education. For decades, state leaders, policymakers, researchers and journalists have used the Fact Book to find accurate, comparable data and learn more about long-term trends.

The 2021 Fact Book includes more than 100 tables on data such as the population and economy, enrollment, degrees, student tuition and financial aid, faculty and administrators, revenue and expenditures. In all but specialized  data based on SREB’s regional survey, figures for each of the 50 states and District of Columbia are available.

The Student Success Imperative
Highlights from the 2021 Fact Book

The onset of the COVID-19 pandemic in 2020 brought shutdowns across the workforce and around the globe. Students returned home, colleges pivoted to online learning, and educators and state leaders adapted to let students learn despite quarantines, a sagging economy and digital disconnection.

Two years and several surges later, students are back in person, but the effects of the pandemic have shifted the landscape of higher education. As states continue to respond to a constantly changing, technologically advanced world, one thing is clear: Postsecondary education will be the engine that drives us as we recover from the pandemic.

Nearly every SREB state has a goal for raising its education attainment levels, in part to meet projected job growth for people with some postsecondary education. The benefits of higher education go not only to individuals but to the communities in which they live. Higher earnings generally follow higher attainment and lead to more tax revenue for local and state governments to fund support services.

Education attainment levels in the Southern region have risen slowly, with 31 percent of adults ages 25 and older having a bachelor’s degree or higher. To raise postsecondary attainment levels further, states must address perhaps the greatest barrier to access: affordability. The average annual cost of attendance for public four-year colleges for the 2019-20 academic year was $21,000 ($11,100 for public two-year colleges). The cost for a public, four-year institution for one year is 138 percent of the average annual household income for those in the lowest fifth of incomes, and 31 percent for those in the middle fifth.

Rising student debt also discourages some students from pursuing a postsecondary degree or credential. In 2019, 54 percent of college graduates in the SREB region had outstanding college loans, with an average debt of $28,200. Student debt disproportionately affects Black and Hispanic students, and this in turn affects the diversity rates of faculty members.

The decline in college enrollment is another threat to attainment levels in SREB states. Slowing of population growth had already already affected enrollment, which declined more during the pandemic.

With fewer students enrolling, states and postsecondary institutions face the challenge of helping more students succeed, particularly from populations that have historically had lower graduation rates, including Black, Hispanic, rural and first-generation students.

Higher education attainment levels are associated with higher earnings. Adults with bachelor’s degrees in the U.S. earned an average of $75,800 in 2019. Those with an associate degree averaged $50,900, 20 percent more than individuals with only a high school diploma or GED.

Jobs that require at least a postsecondary certificate are expected to show above-average growth. The U.S. Bureau of Labor Statistics predicted that growth in total employment would slow to 4 percent from 2019 to 2029, while job growth for individuals with a postsecondary certificate or associate degree is expected to increase about 6 percent. Jobs requiring a bachelor’s degree are projected to rise more than 6 percent.

As states and postsecondary institutions emerge into a new sense of normalcy as the global pandemic progresses, we have only begun to see what kind of effects it will have on higher education. From increases in virtual attendance to decreases in enrollment to the fallout from the Great Resignation, future editions of the Fact Book will show how the COVID-19 pandemic shapes the future of higher education and the workforce. 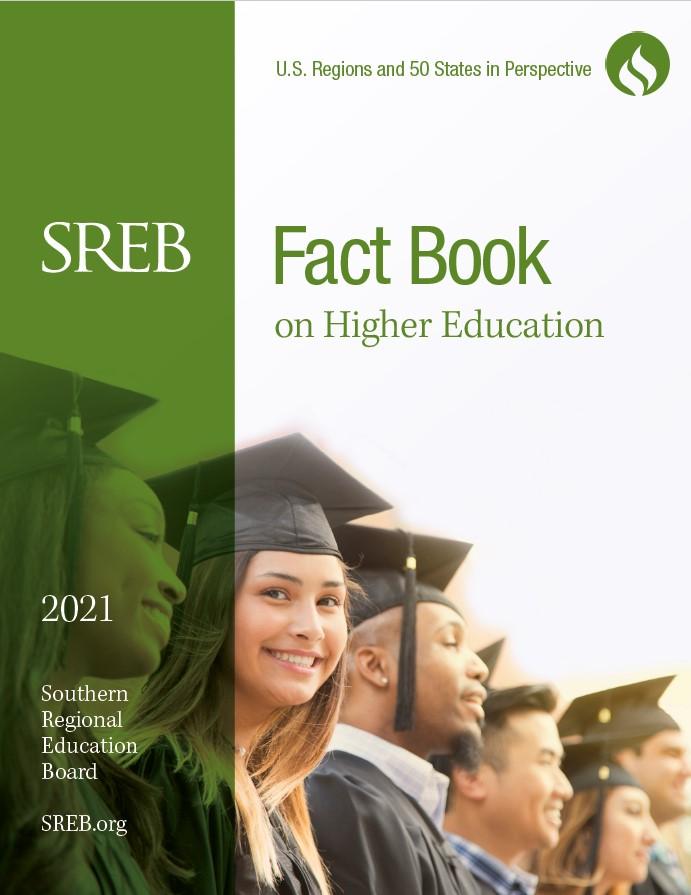 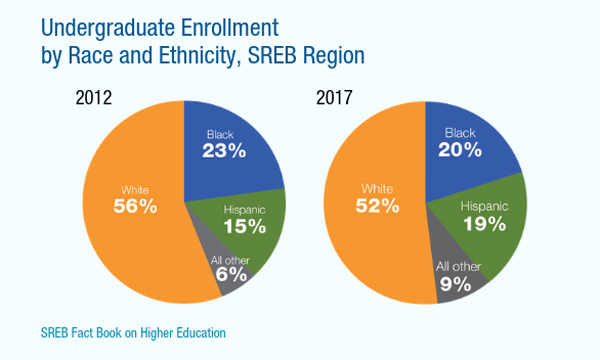 Susan Campbell Lounsbury joined the Southern Regional Education Board in 2014 as the director of education data services. She has more than 25 years of experience in higher education policy and practice. Susan is responsible for coordinating the collection of data for the SREB State Data Exchange. She analyzes data and produces publications, such as the SREB Fact Book on Higher Education, Featured Facts, and Indicators Report.