Bandwidth Expand reliable, affordable broadband to ensure educators and their students gain the full benefit of current and emerging technologies.

What is the issue and why is it important?

Access to affordable Internet connectivity — or broadband — is a continuing struggle for K-12 schools.

Currently, K-12 schools generally get most of their Internet connectivity from telecommunication companies. Schools have been limited in the amounts of connectivity/bandwidth they can purchase, because the rates are prohibitively high and their funds are limited — even though they have access to the Federal Communication Commission (FCC) administered E-rate program. This program allows K-12 schools to purchase bandwidth from telecommunication companies using special discount rates. The reduction in rates is offset for the telecommunication companies by fees that consumers pay into the FCC’s Universal Services Fund. The demand for bandwidth through the program, however, has outpaced the fees collected each year since the program began in 1996. In fact, a 2013 Consortium for School Networking (CoSN) survey estimated that 29 percent of school districts did not apply for E-rate funding, because they did not expect to receive sufficient funding. This means that schools’ efforts to increase broadband have gone unmet; additional effort is needed to address existing shortfalls and to prepare for current and increasing demand. The FCC’s E-rate is currently under review to determine if it can fund the infrastructure and recurring costs of K-12 schools’ growing broadband needs.

While these conflicts are played out in federal and state legislatures (and sometimes in courts), the needs of K-12 students for greater access to the Internet continue to grow. At the same time, R&E networks are slowly growing and finding ways to meet the ever expanding research and teaching applications required for today’s colleges and universities. In fact, many of the R&E networks have sufficient bandwidth to assist their states with the growing K-12 needs, if regulations permitted them to link schools to their robust resource.

State leaders need to empower public-private partnerships to find common ground between the various parties to ensure that adequate, affordable bandwidth is made available for all schools. Some telecommunication companies have been willing to join partnerships and enter into agreements to make this happen. States can take the lead in brokering such partnerships and agreements. Whether states need to make infrastructure investments or change regulations, they need to ensure that schools can connect to the Internet, through a collaboration of statewide broadband service providers, public or private.

What is the status in SREB states?

Researchers do not have adequate information about the bandwidth needs of schools and postsecondary institutions to evaluate the current status in most SREB states. The State Educational Technology Directors Association (SETDA) established a standard of 100 megabits per second (Mbps) per 1,000 students and staff per school by 2014-15 and 1 gigabit per second (Gbps) per 1,000 students and staff by 2017-18. The 2018 standard is 10 times greater than the 2015 standard. According to a few available studies, most states, including SREB states, do not fare well on the 2015 standard. According to a 2013 survey by the CoSN, 43 percent of school districts indicated that their schools do not meet the SETDA standard today. In 2011, an FCC study found that 80 percent of E-rate funded schools nationwide lacked adequate bandwidth for their current needs. 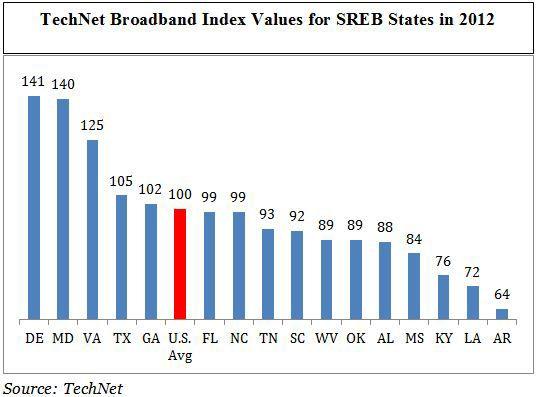 In 2012, 10 SREB states ranked below the national average on a broadband index developed by TechNet, a public policy group of leaders in the technology industry. TechNet’s analysis considers the pervasiveness of broadband access and fiber-optic infrastructure; typical network speeds throughout the state; and the number of people employed in information technology, communication technology and mobile applications development. This survey helps states assess their bandwidth adequacy within a range of technology contexts, including education and homes.

What if SREB states do not address or make adequate progress on this issue?

Without adequate high-speed broadband access, states will not be able to carry on with projects that are integral to key state education policies and initiatives that improve student learning. These initiatives include:

What measurements can SREB states use to assess progress?

Each SREB state should regularly undertake a complete assessment of current and future bandwidth needs. To make these appraisals, states can use the following measures and standards:

What are some next steps SREB states can take?

Establish strategic broadband policy. Develop state-level broadband policy, using the guidelines established in the National Broadband Plan. Congress directed the FCC to develop the National Broadband Plan in 2009 to create a long-term national strategy to assess and meet the bandwidth needs of the K-12 and postsecondary communities in an affordable and sustainable manner.

Plan. Outline specific actions, timelines, assessments and funding models based on realistic data about schools’ use of data and digital technology and their outcomes to achieve strategic goals.

Inform. Share information about current and future bandwidth and applications needs for local and regional areas in state — all within a national context; inform state stakeholders of the shareable resource available to meet educational needs.

Collaborate. Work with local public and private commercial service providers and enlist the help of regional and national R&E networks to access affordable bandwidth through mutually beneficial agreements. A successful outcome for many states would be for R&E networks to serve education institutions — including K-12 schools — and for commercial providers to serve homes and businesses.